I have learned to expect something special at every single airfield. I have only been disappointed once.  RAF Stratford was not one of the disappointments. Local people I had asked in nearby villages had not heard of it; tried to direct me to Long Marston nearby. This happens to the lost airfields; they tend to get subsumed in the memory into other ones which still have a visible identity.

RAF Stratford was not well placed, being across the flight path of the parent station at Wellesbourne; perhaps that is why it was finally let go. Nowadays it is agricultural land, industrial estate and quarry/aggregate; not very promising, it seemed. I had rung around all the businesses on the industrial estate; only one replied, and I spoke to John Witherford at the quarry, who gave me directions, but said there was nothing there these days.

Today, as I turned into the industrial estate,I saw a long line of dark trees crossing the nearby fields. I am learning that sometimes these were planted along the old runways – to make windbreaks to shelter the crops, or to mark out the runways so they should not be forgotten?  Both, perhaps. I called at the one door in a long warehouse unit to try and get my bearings and to see if anyone there knew of the airfield.  The person who came to door said, ‘Yes, that’s the airfield there, and my father served there during the war’.  Hubert ‘Rickie’ – I didn’t get his surname – was ground crew here, and already this open farmland site began to feel personalised. 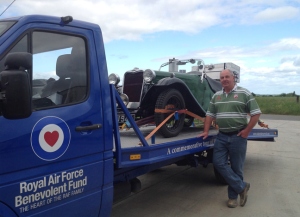 Further round, I drew up (tentatively) at the quarry/aggregate site and a man came out of a temporary building.  It turned out to be John Witherford; he remembered my call and our telephone conversation some months back, and now we were very pleased to meet each other. John’s father was a sniper during the war, and got a mention in dispatches and an award for bravery, though John has yet to discover what he did or where.   Like so many, John wishes he had asked his father more questions about it all while he was still alive. I took some photographs of the line of trees marching across the fields now covered in crops. John told me there are bunkers in the nearby woods, apparently, and footpaths going to them, as well as one or two other scattered buildings. An old iron scaffolded tower on the horizon looks as if it could once have belonged to the RAF station.  It’s surprising,’ said John Witherford, ‘I don’t think about it much, but when you look for it, there’s still a lot of the airfield around, actually. It’s good to remember it’s here.’ Not much, perhaps, but enough to mark the past on this tell-tale open land where poppies blow in the whistling wind.