Go for a virtual spin in Chattie

Chattie’s test drive before appearing at Brightwell’s classic car auction next week has been very satisfactory. You can join Crispin Thetford in the car for a quick virtual spin down the country lane on his latest blog. Listen to that engine start up!

Chattie’s engineer, Crispin Thetford, of Thetford Motor Engineering, near Malvern, will be with Chattie and me at Brightwell’s on the viewing day for the Spring classic vehicle auction, Tuesday 3rd March. He is extremely knowledgeable about vintage and classic vehicles and from my point of view it will be fantastic to have him on hand so that he can field all the technical questions that are bound to be asked.  Pin has been working on Chattie over the past few months, to prepare her for the tour ahead, so he knows her – literally – inside and out.

If you are planning to be there, do come over and say hello to one or other of us.  In Pin’s words, Chattie is now driving as she should; he’s the one who knows what lies behind that statement; I’m the one who will soon be finding out how great a driving experience that will give me over the next six months.

I am delighted to announce that Brightwells Classic Vehicles are generously supporting the Where They Served tour of UK wartime airfields, in aid of the RAF Benevolent Fund.

I bought ‘Chattie’, the 1935 Singer Le Mans sports car, from a Brightwells classic and vintage vehicle auction last March and Chattie will be on show at this year’s auction on 3rd and 4th March (viewing and sale days). If you are going to be there, please come and say hello and find out about my fundraising tour.

See Brightwell’s own website page all about ‘Where They Served’ HERE. You can also find it on a link from Brightwell’s Classic Vehicles page under ‘NEWS’

Engineering as an art form

I am a musician by training and temperament (no need to comment here, if you know me!).  I have had something of an initiation into classic and vintage cars through my husband, AKA Ground Control, but now of course with acquiring ‘Chattie’ the 1935 Singer and knowing I am going to be spending most of the summer driving her, my initiation is having to be much more practical and hands-on.  A revelation in this process is seeing the engineering work being carried out on ‘Chattie’ by Pin Thetford of Thetford engineering, which is something on the level of an art form. There is an elegance in the way in which the structure and design of the car, the materials, the variables, the minuscule measurements and the almost intuitive understanding of how the whole works in harmony with its parts come together, that is a pleasure to witness. I would urge you to have a look at Pin’s latest blog about king pins and bushes, titled ‘Strange Measurements’: http://www.thetfords.com/blog/ You won’t be disappointed, I promise!

Want to find your relative’s service record?.  Since publishing ‘Flying Blind’, so many people have asked me how to go about finding the service record of someone in their family that I have given some information about it on my Flying Blind website: www.flyingblindnightfighter.com

Have a look at this website dedicated to the brave men who sat in the back of an aircraft in a turret or other exposed capsule, watching out for and firing at the enemy:  http://www.air-gunners.co.uk

Fighter pilots often owed their lives to their gunners, and vice versa.  With the changing technology and needs of warfare, gunners often changed jobs, learning to be wireless operators or radar operators. When 256 Squadron converted from Boulton Paul Defiants, which required a gunner to operate the armed dorsal turret, to Beaufighters, which had radar operators instead, the Squadron’s gunners were given the opportunity to retrain as ROs if they desired. Many of them declined and were transferred to Bomber Command in early 1942.  By Christmas that year, my father had learned that all of those who transferred were lost in action, apart from one who was a POW. 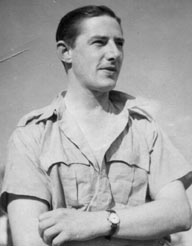 On occasion, Dad’s RO, Ralph Gibbons, even had to act as gunner in a Beaufighter when they were converted to daytime coastal command duties, operating a Vickers gas-operated machine gun. Under fire from ME109s, he did his best to defend their Beaufighter while my father put the plane into full throttle and took emergency evasive action. One plane was shot down beside them, another never returned to base. Ralph was trained initially as a ‘navigator’, and his skills and expertise were continually being developed throughout his wartime career. He spent some time on returning from North Africa as an instructor within Bomber Command, and finished his service on Mosquitos, flying not with my father but with a Flt Lt McAlpine on 23 Squadron at Little Snoring in Norfolk.  If anyone has any information on Flt Lt McAlpine, I am sure Ralph’s family would be delighted to learn more about him.