A Blenheim Summer at the RAF Club 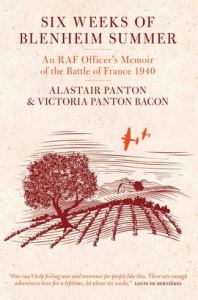 I have just returned from London, having had the great privilege of attending a reception in aid of the RAF Association at the wonderful RAF Club. This was a launch of the book ‘Six Weeks of a Blenheim Summer’ by Alastair Panton Bacon, edited and compiled by his granddaughter, Victoria Panton Bacon: a highly recommended read. The book gives a detailed and atmospheric account of that turbulent period when the tide of war was rolling in the German’s favour over the Low Countries and France, and the Dunkirk Evacuation snatched British troops out of its seemingly relentless path. The book is a very personal account, showing the bravery and resourcefulness of Panton and his colleagues; there is humour, insight and sadness.  The reception on Thursday evening did full justice to the book and Victoria’s work in bringing it to print.

The under-side of a Singer

Before I took Chattie to Malvern to the Militaria convention yesterday, Ground Control and I collected her from Pin at Thetford Motor Engineering. Pin put her up on the ramp so that we could look underneath. For your delectation and entertainment, here are some of the resulting photographs. It all looks nicely robust and remarkably clean to me. 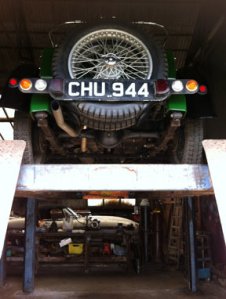 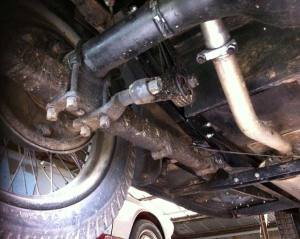 I drove the thirty or so miles back from Malvern’s militaria convention yesterday evening; the first really substantial drive I’ve ever had in Chattie, and certainly the first such drive since getting her back from Thetford Motor Engineering after her thorough overhaul. What a drive! What fun! She handles beautifully, brakes on request, starts without a murmur, and I’m now getting the hang of it all: the gear double-declutch shifts, starting after only a short while on choke (a couple of minutes only on choke, then catching with the throttle when I push it in, after which she ticks over obediently, waiting…), the understanding of where she’s happiest, and knowing when the car is telling me a gear change is needed, rather than me telling her where I think it ought to be – which means we are not having so many arguments about it!

To top it all, the sun set on my westward way home, providing me with at least half an hour’s free drive-through movie. You’ll be relieved to learn that I pulled into a lay-by to share this view with you.

The Where They Served tour?  Bring it on!

Until I did this on Friday, I thought the ‘D’ in ‘double-dee clutching’ (as I heard it – I had never seen it written down) was just the letter D, standing for some arcane bit of the clutch mechanism. Because of my new-found knowledge, I now come to realise that pressing the clutch pedal is actually de-clutching, ie, making the two discs of the clutch mechanism pull away from each other to allow the free spin of the gearbox. Tell me if I’m wrong. However, if this is the case, whoever called the clutch pedal the clutch, when they meant the de-clutcher, was sewing the seeds of confusion, if you ask me.

Now I know how a gearbox works – or do I?

Yesterday Crispin Thetford showed me two gearboxes laid out on the bench: one a modern synchromesh and the other a crash gearbox. You have to remember that I’m someone whose idea of what goes on under the bonnet of the car is similar to mankind’s knowledge about the deepest depths of the ocean – murky, to say the least. So it was a revelation to me to see what is actually happening in a crash gearbox when I crunch – I mean change smoothly through – the gears.

Now here’s my explanation. This is ‘Gearboxes, Key Stage 1’.

The gear machinery is essentially linear (not what I imagined, for some reason), with two ‘axles’ side by side with rings of cogs, which engage with each other. One of these ‘axles’ slides along its length, moving its row of cogs along to engage differently with the adjacent ones. (OK – this is a lay person’s version!)  At the input end is the spin produced by the engine, at the other is the output to the moving parts, ie wheels, ultimately. The gears in between engage the spin with the required effort (is this the same as torque? Stop laughing, you experts, I’m doing my best!). In the one I was looking at (a vintage Riley), as in the Singer, there are three cogs to engage for 1st, 2nd and third gear (going up in size accordingly). For the fourth gear – and here’s the real punchline – cogs slides right up to engage directly with the input from the engine, so that in fourth gear, the speed of the engine and the speed of the output to the wheels are the same. This last ring of cogs aren’t fixed like a collar with the ‘teeth’ outwards, but upwards, where they engage with others facing them. You have to have the two pieces moving at the same speed in order for them to click together.

So, to go down from fourth to third (my bete noir at the moment) you put the car into neutral with the first push on the clutch pedal, then rev the engine to make the input bit go faster (have I lost you here) to match what the car engine would sound like to go at the speed you are aiming at in third gear. Then clutch pedal in again, slide smoothly into third. You hope.

Right then, you car buffs; after you’ve stopped laughing, perhaps you can mark me out of 10.

For a proper explanation, you’ll have to wait until Crispin has time on his hands to include it in his own excellent blog at Thetford Motor Engineering

Things are hotting up now with the beginning of the Where They Served tour only about six weeks away. I drove Chattie back today after the excellent time she had at Brightwells Classic Car Auction, where she was guest of honour. The place was full of interesting people and interesting cars. I’m biased, but I still think Chattie looked one of the best.

Today Ground Control and I collected Chattie from Brightwells and for the first time in six months I was able to drive her. After all the work Crispin Thetford has put into her, she is driving very differently. The steering is firm and stable, the wheels are better balanced and hold the road brilliantly, and the brakes are sharp. I think I’d had the feeling that vintage cars wandered around the road and had brakes like sponges, but that was only because Chattie had been very much in need of the overhaul she has now received.  It was a lovely warm sunny day, very like the day I drove her back home when we bought her from Brightwells exactly a year ago, but the experience was quite different. I still crunched the gears coming down from fourth to third, but for the rest of it the gear changes went very smoothly. Next on the agenda is a lesson from Pin Thetford at Thetford engineering workshops near Malvern, where Pin is going to lay out a crash-gearbox so I can have a look at it, and see the moving parts and how it actually works; then out on the road for a driving lesson in Chattie. Can’t wait!

Chattie will be on display at Brightwells Classic Vehicles auction in Leominster this week, Tuesday 3rd (viewing day) and Wednesday 4th March (auction day). I will be with Chattie on Tuesday – do please come and say hello. I will also have copies of my father’s wartime memoirs for sale: Flying Blind: The Story of a Second World War Night-Fighter Pilot’.

The Where They Served tour of my father’s 60 wartime UK airfields starts in April so come and find out what’s happening. The tour is in aid of the RAF Benevolent Fund, who helped my father when he Parkinsons disease, before he died aged 90 in 2012.

As well as viewing Chattie there will be around 200 classic vehicle lots of many different types. I would have my eye on a beautiful blue 1936 Riley, or a very sweet 1937 Morris, if my heart wasn’t already given to Chattie!