Afternoon tea and a whale of a time at Hawarden

I met my uncle and aunt, Chris and Angie at Hawarden Airport (pronounced ‘Harden’), at the Chocks Away Cafe. What a treat! We ordered afternoon tea, and saw the sandwiches being prepared to order. A true afternoon tea with tiered cake stand with delicious crustless sandwiches at the bottom, scones with clotted cream in the middle and cakes atop the rest; pot of tea served in flowery cups and saucers and as many refills as required. All this served with a smile and a view of the airfield. 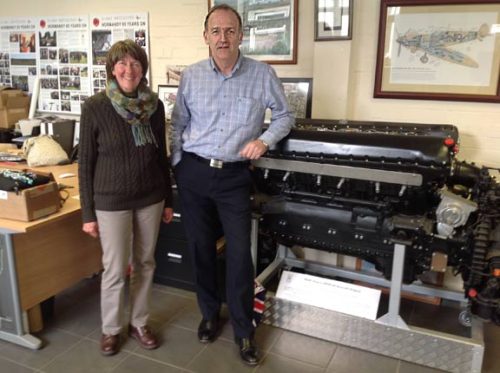 John Phipps at Cokebusters with a Rolls Royce Merlin engine

Chris is one of my father’s half-brothers, and himself spent time here at Hawarden (as also at RAF Valley) in the meteorological station here. After tea, we crossed the airport to the office of John Phipps of Cokebusters, in one of the oldest buildings on site, dating from wartime days. Cokebusters is a live engineering company but also operates a charity from the Normandy Veterans – see  www.d-dayrevisited.co.uk . The office was indeed reminiscent of wartime days, and the walls were covered with things relating to those days. Pride

of place, however, went to a Rolls Royce Merlin engine, which powered such a large part of the RAF’s total fleet of aircraft: Spitfire, Hurricane, Lancaster and the Boulton Paul Defiant being but a few on the long list.

Today, Hawarden is dominated by the Airbus facility. I was stunned to see the Airbus’ aptly-named ‘Beluga’ – a huge whale of an aeroplane indeed. Imagine a large jet with the top sliced off and replaced with an enormous humped back, dwarfing the original cockpit which just peeps out below. Imagine such a ponderous creature moving along the runway and slowly, smoothly pushing up improbably into the air, angling towards the clouds as if being hooked out on a line from the earth by a celestial whaler. It’s an astonishing sight. And the reason for this unlikely feat of engineering? It has all been designed and constructed to carry the wings of the Airbus to Toulouse (I believe) where they are to be fitted to the fuselage. Until today I had never considered that such large planes might be made in pieces countries apart, and if I had, I would never have thought about how such large body parts might be brought together. Now I know.

During the war? Well, the modern Airbus follows in the tradition of the shadow factories, of which there was one here. Nearly 5,500 Vickers Wellington bombers were build here, and over 200 Lancasters. It had a maintenance unit (MU), and also housed No 3 Ferry Pilot’s Pool, Air Transport Auxiliary: it was for this reason that Dad was here on 10 February 1942, in a Dominie, on his fortnight’s stint the ATA.