That’s not a Spitfire, it’s a Defiant.

I have been asked why I pictured my father with a Spitfire when he flew Mosquitos during the war.  There are two answers to that.  The first is that Dad flew 14 different aircraft altogether (not including different marks of aircraft).  The second is that it’s not a Spitfire, it’s a Defiant.  Boulton Paul Defiants flew in the Battle of Britain, but were better designed for attacking slower bombers than interception in fighter combat.  Yes, there is a similarity of outline to the Spitfire, and this meant that they could masquerade as Hurricanes or Spitfires in a crowded sky but were marked out when German fighters found them on their own, and shot down easily. The tell-tale giveaway is the perspex blister behind the cockpit on top of the fuselage: a gun turret housing the gunner, which means that is therefore a two-man plane not a solo job like the Spit and Hurricane. Defiants suffered heavy losses in the Battle of Britain, see http://www.raf.mod.uk/history/boultonpauldefiant.cfm , but the time Dad flew them in July 1941 in 456 Squadron at RAF Valley in Anglesey, and then 256 Squadron at Squires Gate, Blackpool, they were being used as night-fighter planes, defending cities in the North West from German bombing, for which they were better suited. There were still problems with them, however, and they were not universally popular. 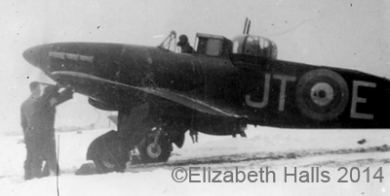 The photo shows pilot Bryan Wild and his gunner, Stanley (Ack) Greenwood, preparing for take-off in a Defiant at Squires Gate, December 1941.

Dad also flew Hurricanes and a few Spitfires in his time, as well as the aforementioned Mosquito. ©Elizabeth Halls 2014