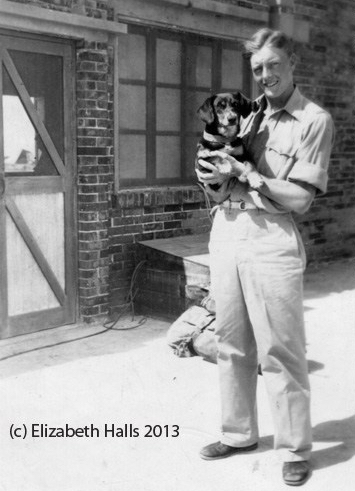 Charlie Peace had acquired a Dachshund, left behind by the retreating Germans, which he named Fritz. Fritz was good company, and I often took him with me on these swimming expeditions.” wrote Dad in 1943, pictured with Fritz, right.Fritz was a firm favourite in the Squadron, and obviously enjoyed his time in the Mess, as can clearly be seen by his wagging tail and expression in the photo.

After Charlie was killed, missing in action in March 1944, Fritz became Dad’s charge until Dad went back to Blighty in April. Dad told me later that Fritz was friendly but a ‘one-man dog’. It must have been hard for the little chap to be transferred from one owner to another. I wonder where he ended up eventually, and hope he was OK.

Bryan Wild standing at the back, next to ‘Sheriff’ Muir, and Doc MacDonald on piano. Charlie Peace with ‘Fritz’ on his knee. 46 Squadron 1943 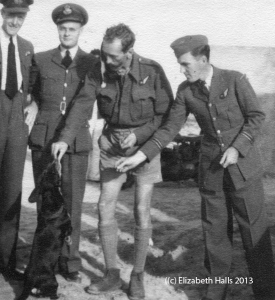 Dad left, and Charlie (in shorts) with Fritz. Charlie also has Timbaki the cat on his shoulder – you can see the paw coming down!